Changes in climate anomalies are becoming more and more frequent as global warming becomes more and more severe. In the recent 26th UN Climate Change Conference (COP26), representatives from different countries achieved the consensus of controlling the temperature rise within 1.5 C before 2050; the whole world is working on carbon negative technologies, including the control of greenhouse gas emissions, the acceleration for the construction of renewable energy, and the development and implementation of CCUS (Carbon Capture, Utilization and Storage), to further accelerate the progress towards achieving the global net zero carbon emissions target by 2050. Meanwhile, people are also thinking about whether uncontrolled production and excessive consumption have caused the depletion of resources and environmental pollutions, resulting in causing irreversible disasters to the earth; the “circular economy” model that emphasizes the recycling and reusing of materials has also become the execution direction towards the implementation of the sustainable development concept.

Over the past half century, since the advancement in the semiconductor industry drove the rapid development of new information and communication technologies, not only did this improve the quality of life for people, but it also made important contributions towards the development of the global economy. However, during the manufacturing process of semiconductor components, large amounts of energy and materials were also consumed, and considerable amounts of greenhouse gases and waste emissions were also produced. According to the carbon footprint research on electronic end products such as the Z5 smartphone conducted by Sony Ericsson in 2016, the maximum amount of carbon emission produced during the manufacturing of some of the semiconductors was approximately 33kg of CO2 per unit throughout the life cycle of design, manufacture, distribution and usage (as shown in the attached figure): 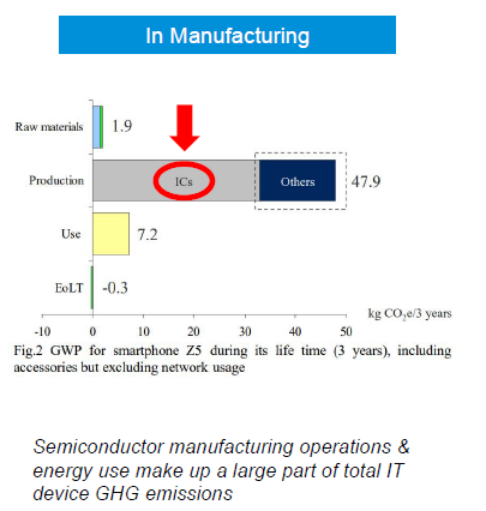 As the core high-carbon emission field of high-tech development, it is the responsibility of the semiconductor industry to implement green manufacturing technologies in order to achieve the goals of energy-saving and carbon reduction. Fortunately, the World Semiconductor Council has already proposed sustainable development guidelines for the semiconductor industry since 1990, and had formulated industrial self-management norms that focused on fields including water resource management, energy management, greenhouse gas management and waste management. A successful example of this was the formulation and implementation of the international energy-saving benchmark standard for semiconductor manufacturing equipment (SEMI S23), and the achievement of the goal to reduce perfluorocarbon (PFC) type greenhouse gas emissions by 30% in 2020 compared to 2010.

The development of the semiconductor industry has been impacted by several global macro factors in recent years, such as the COVID-19 pandemic, geopolitics, logistics congestion, inflation and the war between Russia and Ukraine, etc. In addition, there were also many natural disasters caused by extreme weather, such as the unusual blizzard in Texas and the drought and water shortage that hadn’t occurred for over fifty years already in Taiwan, etc. Not only did these test the resilience of supply chains and the implementation ability of business continuity plans of semiconductor enterprises, but they also made leaders of semiconductor enterprises pay more attention to the global issue of controlling global warming; many challenges are urging businesses to reduce their carbon footprints. Many global semiconductor companies have created Chief Sustainability Officer (CSO) positions nowadays, responsible for supervising the implementation results of the environmental, societal and company governance (ESG) plans, and the publishing of the company’s annual sustainable development report. The following illustrates how the semiconductor industry has undergone green transformation through new development trends in energy and resource management:

Today, when the greenhouse effect has already caught global attention, the greenhouse gas emission issue has already become an operational cost and risk for modern enterprises; the pressure of carbon reduction is also increasing daily for semiconductor industries, and has evolved into an important part in the company’s operational strategies. Under the overall environment with the clear goals of global ESG trends and global warming control, semiconductor enterprises not only have to save energy and reduce greenhouse gas emissions continuously, but they also need to increase the proportion of renewable energy used.

There are three major categories of greenhouse gases that should be checked and registered in semiconductor companies according to the regulations of the international Greenhouse Gas Protocol (GHG Protocol) (as shown in the attached figure): 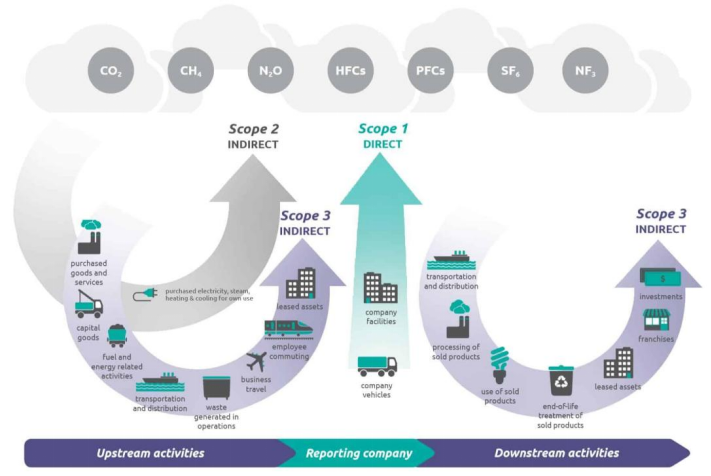 ● Scope 2: Mainly from indirect emissions of energy (electricity) utilization. The carbon dioxide (CO2) emission equivalent can be converted by multiplying the “electricity usage” of each semiconductor company by the “discharge coefficient” (announced by the Bureau of Energy, Ministry of Economic Affairs). And the discharge coefficient of Taipower for 2020 was 0.502kg CO2e/kWh.

In terms of green energy introduction, TSMC had already purchased approximately 1.23 billion kWh of renewable energy certificates in 2020; TSMC joined the RE100 international initiative and promises to achieve 100% renewable energy utilization before 2050. When the structure of the 2050 net-zero carbon emission roadmap (as shown in the attached figure) that TSMC promised is analyzed, even if net-zero could not be fully achieved through energy-saving, carbon reduction and green energy, it will still be achieved through the purchasing of carbon credits and the introduction of CCUS negative carbon technology. 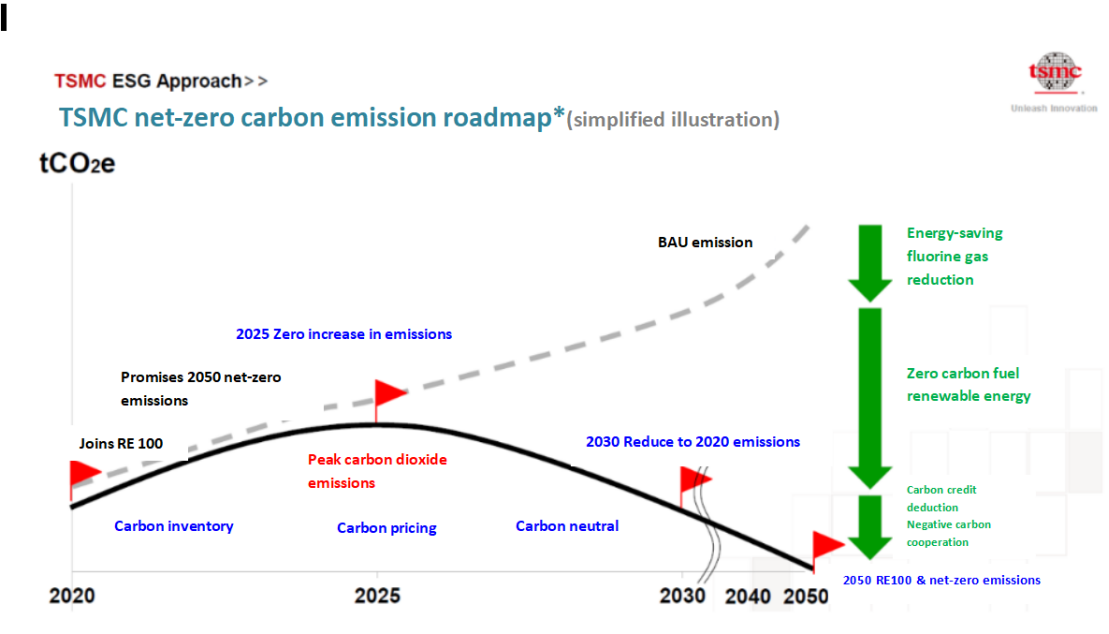 The environmental aspect of resource management in semiconductor plants includes resource utilization, waste management and the development of green manufacturing technologies, etc. Many enterprises in the semiconductor industry have implemented the 4R (Redesign, Reduce, Reuse and Recycle) idea in recent years. Redesign and Reduce means reducing resource consumption from the source, and Reuse and Recycle refers to reusing waste from manufacturing processes to achieve the goal of circular economy.

Take water for example, large amounts of water are used during the manufacturing process of semiconductors to maintain the cleanliness of components; therefore, industries always pay attention to the stability of water supply in Taiwan, which is prone to water shortages. This is also why semiconductor plants keep improving their waste water recycling technologies. Take TSMC for example, they have obtained the highest platinum level certificate from the Alliance for Water Stewardship (AWS), where they can use one drop of water up to 3.5 times. In TSMC’s newest factory, water can be recycled and reused up to seven times before it is finally discharged.

There are also many successful cases with other semiconductor liquid process materials such as organic, inorganic and formulation chemicals:

There are also many successful Redesign and Reduce cases that use optimization of processes and chemical substitutions at the source to achieve the reduction of resource consumption and reduce the harm to the environment:

Even though many semiconductor enterprises already have great results marching towards energy-saving, carbon reduction and circular economy development, however, facing the increasingly rigorous expectations and requirements for environmental protection from multiple stakeholders (such as the government, investors, community, customers and suppliers, etc.), semiconductor industries still have a lot of room for improvement. Especially when issues such as climate change and the earth environment are not limited to the management results of individual enterprises in the ESG field, they also have to do with the overall destiny of mankind. While semiconductor industries are continually leading the development of digital technologies, the importance of implementing green manufacturing technology cannot be neglected either. Leading manufacturers, such as the CEO of Intel, Pat Gelsinger, once stated that considering environmental issues first not only helps companies realize long-term values, but it is also closely related to the investors, customers and employees. Senior executives at TSMC have also publicly stated that carbon reduction can create more development opportunities for company operations; customers will have more carbon reduction requirements, and investors will also agree that TSMC is a sustainable company.

Semiconductor industries are expected to commit to the implementation of ESG measures, complete the task of green transformation successfully, play the role of leader in implementing carbon neutral and circular economy, and make more contributions to create a better and more sustainable world!

2.Tia: Towards a green option for carbon neutral